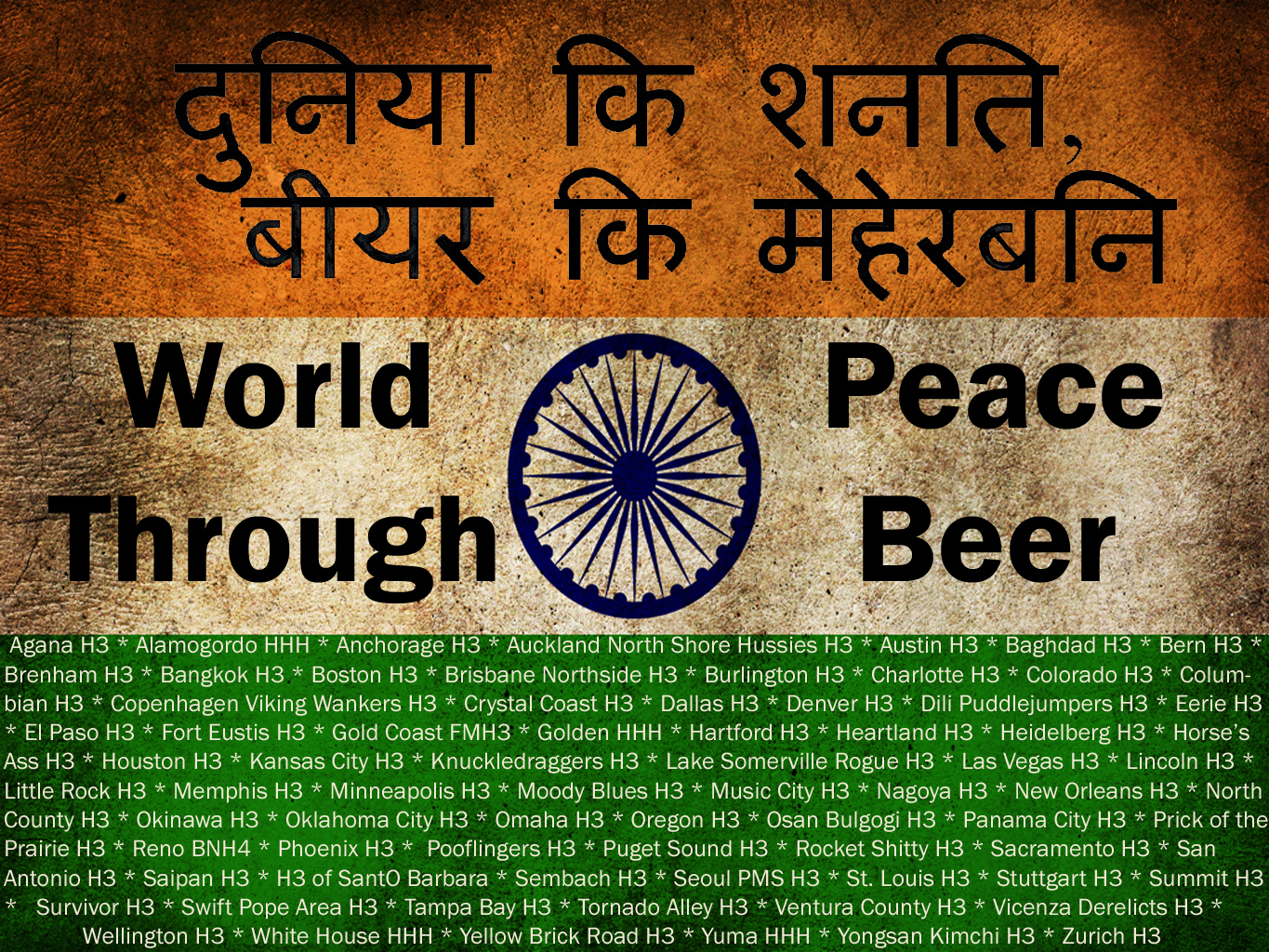 Join the "back to basics" hash movement

Get a jpg copy of this year's shirt design, and get your hash on the back of the shirt, by notifying Corrigan at onhome2@gmail.com. Make your own swag, modify it at will!

Some info on WPTB:

Q. What do you mean "back to basics" hashing movement?

A. World Peace Through Beer is a theme run, so I guess it isn't really basic. But it is about a trail and it is about beer. You don't have to dress up like an idiot and make a spectacle of yourself in public, follow current events, bring anything, or eat any thing revolting. So as theme runs go, it is pretty basic.

A. Most of the year hash groups try to do as much as they can for as little money as possible. So, we drink cheap, or at least, ordinary beer. This event is a beer tasting with -- if it is done right -- a sense of humor.

A. I thought you'd never ask. Music City HHH, founder of World Peace Through Beer, charges $5 for a regular run. WPTB costs $20. The imported beer is costly and the fee includes the shirt. Here's how the run works: Set off on a standard hash, with a short but strenuous leg to get folks warmed up. Then hit beer stop 1, perhaps a secluded alley behind a Laotian grocery store (yes, we have Laotians in Nashville, and Kurds, but the latter don't seem to have their own beer). Serve BeerLao in 6 or 8 oz. cups. Again, this is because the stuff is expensive, but also because you'll have a few more beer stops and you don't want to unleash the obnoxious types (yet). After everyone tastes, send the pack off on the second leg. Maybe you'll run to a park, like we have in Nashville, with a shelter in the shape of a Japanese pagoda. It's near there (maybe in the woods near the park, so the cops don't get you) that you will serve beer 2, perhaps Kirin Ichiban.Send the pack off for beer stop 3 now. Sometimes you have to get creative with your locations and their connection to the country represented. Sometimes it is a stretch. One time we thought about looking for a bakery for beer from Denmark (Danish pastries, get it?) but there wasn't one around. So we had Tuborg near a Saab auto repair shop, because Sweden is near Denmark. Another time we had Peroni Italian beer near a TV station with a Greek anchor woman, because Italy hangs down into the Mediterranean just like Greece does. After beer stop 3 the pack starts to get kind of festive. It is good to make each leg progressively shorter after this. We have six beer stops, but the first rule of the hash is there are no rules. None of what I have written here should be construed to be the "rules" for WPTB. If you want to do it, do it your way and have fun. We sure do. We end up like a regular hash, with a circle, but still use the demi-cups and the finishing beer generally represents something, like the T-shirt language if possible, or the year's Interhash location or something. Just have fun with it!